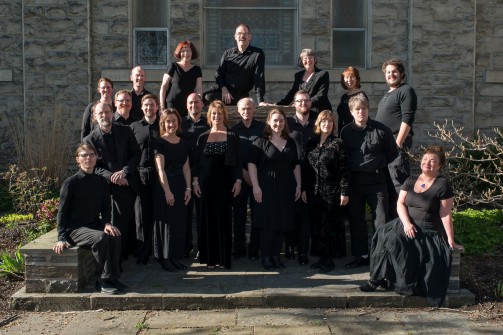 Singers (click on a name to read a brief bio)

Sean Linfors is the Associate Director of Choral Activities and Assistant Professor of Choral Music Education at Ithaca College School of Music.  He holds a Ph.D. in Choral Music Education from Florida State University, and is an active conductor, clinician, and educator, as well as being an advocate for access to music education.  At Ithaca, in addition to conducting the Chorus and Madrigal SIngers, an early music ensemble, Linfors teaches conducting and rehearsal techniques.  Recently, he was named the Artistic Director of the Syracuse Chorale.

A public school teacher for ten years in Richmond, Virginia, Newport News, Virginia, and Orlando, Florida, he led successful choral programs and was active in the leadership of the American Choral Directors Association.  Linfors has recently been an invited conductor and lecturer throughout New York, and his recent articles relate to post-undergraduate music teacher success, as well as the choral music of the American composer Stephen Paulus.

Recent and upcoming performances include Susa’s Carols and Lullabies of the Southwest, Ramirez’s Misa Criolla, Faure’s Requiem, Bach Cantatas 4 and 102, David Lang’s Pulitzer Prize-winning Little Match Girl Passion (under the supervision of the composer), Sing for the Cure, and Schubert’s Mass in E-flat, with the Tallahassee Community Chorus.  Groups under Dr. Linfors’ direction have sung internationally and at several choral and music educator conferences, and in 2013 he was invited to be the Guest Conductor of the East African Choral Festival in Nairobi, Kenya.

Sean lives in Ithaca with Sarah, also a music educator, and their two boys, ages 2 and 8 months, both avid music-makers by any means available.

The Board assumes responsibility for our group’s fiscal well-being, long-term direction, and overall stability. We are looking for interested community members to join these critical efforts. Contact us for more information.

Sunday April 16, 2023 – 4 PM
“Alzheimer’s Stories”
St. Catherine of Siena Church
309 Siena Drive, Ithaca, NY
____________________________
— These programs are possible in part by a grant from the Tompkins County Tourism program
— We would like to thank the Erin Aljoe Schlather Dedicated Memorial Fund (EASM) of Community Foundation of Tompkins County for their support of the Cayuga Vocal Ensemble

“A Celtic Christmas” available on CD

What some of our audience members are saying…

“It was such a wonderful rush of happiness. Masterful preparation (loved that some was sung from memory – allows more connection with the audience), great programming and an overall thoughtful program. Kudos to all.”

“The CVE has a wonderfully blended sound.  The selection of music was quite exciting as well.  It’s wonderful to bring a community together through music.”

“WOW That was a concert to remember. Please offer our congrats to the entire merry crew. Quite excellent all around.”

and from For the Flowers

“Incredible performance! Your ensemble is truly astounding. The blend, intonation, dynamics, etc.; it took me back to my days as a music major at IC. You folks are remarkable!”